What Philly’s Homeless want from the Next Mayor

No, they do not know who Doug Oliver is. Some of them don’t even know its an election year, let alone the names of the candidates. Some of them are drunk to the point of speechlessness. Some just want you to know that C is the largest letter in the alphabet. But neither are those problems that couldn’t be found in the city’s homes.

Meanwhile there are others — homeless and formerly homeless — who are sober and deep in the struggle. They want to partake in democracy and for their voices to be heard. They have names. They have stories. And they have questions for the next mayor of Philadelphia if anyone will ask them.

Fine police officers who make the homeless sleep out in the cold. I wish I could smile more for this picture, but I ain’t got no teeth. – William Smith

William’s family is originally from Georgia. He moved up here more than five years ago to work in a furniture store in the Northeast, but then he had a major stroke, the company went belly-up, and he couldn’t collect unemployment.

He sleeps in Suburban Station, sometimes Market East. On subzero nights, he said, the police let him and other homeless persons sleep on the unused tracks. But three nights a week on average, a SEPTA Transit officer will wake him up around 4 a.m. and tell him to get out of the station. When asked why he doesn’t go to the shelters, he cited numerous bad experiences of younger men taking advantage of, and stealing from, the older men.

“Homeless people got enough problems without someone telling you you got to get out,” he wants the next mayor to know. “They don’t even put dogs out in the cold like that around here. They fine you. So they should fine these transit policeman that got such good jobs and tell them that they shouldn’t do that. They’ve got money, they can pay the fine. And then maybe they’ll stop.”

William added that he is a registered democrat who has voted twice in Philadelphia. He believes in voting. But he doesn’t understand how he moved to Philadelphia to pay one of the highest wage taxes in the country, and yet when he ended up jobless, homeless, and with a medical condition, he felt there was no one there to help. 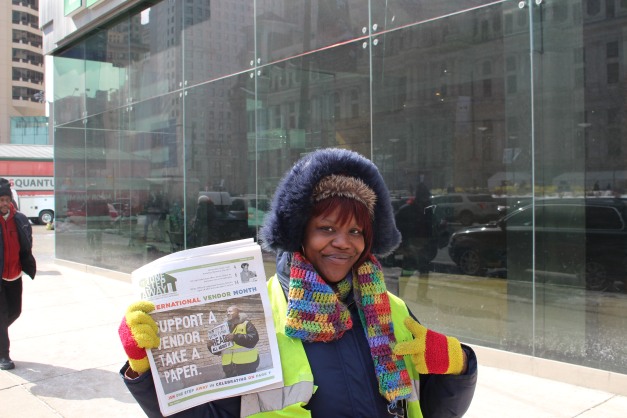 A stocky man wearing two sweatshirts approaches Tauliba while she’s selling One Step Away newspapers at 15th and JFK Boulevard. He says he’s no bum, he just needs 75 cents to get home. One Step Away vendors can make a dollar a day or 30 dollars a day — but by no standard is it ever much. Tauliba doesn’t think twice. She pulls out four quarters from her pocket, puts them in the stocky man’s palm, and tells him to “have a blessed one.”

Tauliba was outraged at a story she read in the Metro last week, which tried to make a moral case against giving money to the homeless. The article makes its claim and then gets a few quotes to corroborate the point that, even though they sometimes do need money for food, homeless people are likely drug-addicts and alcoholics at the end of the day.

Nothing is going to get done if we keep closed mouths and closed hearts.

“That’s not everyone’s story out here,” she said. “Nothing is going to get done if we keep closed mouths and closed hearts.”

When her family couldn’t take care of her at age 16, Tauliba spent two years homeless on Philly streets. At the time, she didn’t know what services were available to the homeless. “Maybe I was too stubborn,” she said, “but I didn’t know how to get help, and there was no way for me to know.”

Her request for the next mayor? Increased access to information.

Even today, people stop her on the street and ask how to get to the social security office. She’s mindful that not everyone has internet access, and admits that she doesn’t either, despite having a home now. She’s mindful of the illiteracy among the homeless, and even though she says it may sound bad, she suggests always putting the word FREE to bring the homeless in — “because when somebody sees free, they look at it.”

Tauliba also believes there should be more people on the streets informing the homeless first hand about what they can do. She says there need to be more programs for men — from literacy to house placement to job-training. And she also says the city needs to reexamine how these social welfare programs work, because even homeless people don’t want to spend half of their lives in a waiting room with no guarantee of help. 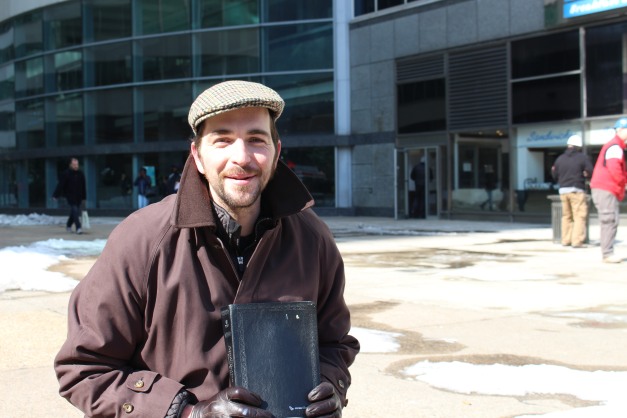 Repeal the ban on feeding the homeless.  – Jerame Bohman  Jerame collects money in Center City — but not for himself. He panhandles for others, guided by memories of hunger.

In 1994, his mother fled an abusive boyfriend in Tennessee and came to Philly with her two sons. They survived for months in a cramped ’79 Cadillac, begging for money on Bustleton Avenue and Red Lion Road in the Northeast. He remembers nights sweating next to his brother in the back of the car.

It was the generosity strangers poured out that allowed them to get an apartment in the Mayfair neighborhood, and Jerame, now in his mid-30s, is trying to pay that kindness forward.

He plans on going back to school to complete his culinary degree, and to keep the food coming for the city.

For the next mayor of Philadelphia, he has a clear message.

“I don’t appreciate the ordinance against feeding the homeless,” he said. “I think they should repeal it. Who are they to tell us not to feed the homeless? We’re the people, for the people, by the people.”

I paid my debt. Let me get my life started. – Stephan Burnside

December 20, 2014, Stephen walked away from a 20-year sentence in an upstate prison and went right to being homeless. Yes, he was convicted of manslaughter as a young man. He’s honest about that. And now, he’s a tired old ex-con with gray-flecked hair asking for donations on the street. His only surviving family member, his brother, is doing life.

“I did two decades in jail, I come home, and now this is what I got to go through,” he said. “I want to learn how to read and write.”

Stephan said he doesn’t know what sort of resources there are for an old ex-con. He collects food stamps and medical services through welfare, but in the two months since his release he’s made no headway on housing, literacy, or job-skill training. To the next mayor he has a simple message:

“I paid my debt. Let me get myself started.”

If you see a homeless person sleeping outside in dangerously low temperatures, please call the Project H.O.M.E. Homeless Outreach Hotline: 215-232-1984.